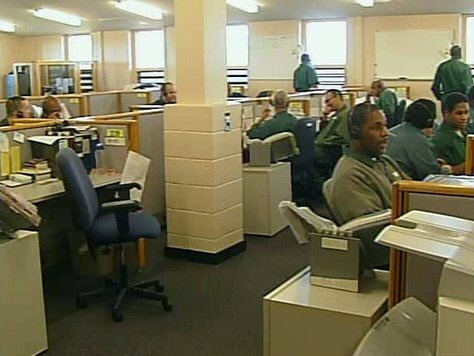 Did you know that many well known American companies use inmates in their call centers.  Imagine calling AT&T and speaking with an inmate to assist you.  9 times out of 10 you already have.  I call this the new slave era. These inmates are paid up to .50 cents an hour for their labor, and no they don’t have a choice.  It’s either you work or face possibly more time.  Sounds like slavery to me.  All except the .50 cent pay per hour, but, guess what a tax paying citizen would make? I’m guessing at least minimum wage, and .50 cents is laughable compared to that.  Here’s the details below from an article I read about inmate call centers and why they exist.  Prison for profit. The mass incarceration of black people in America has put a new face on slave labor.

When you call a company or government agency for help, there’s a good chance the person on the other end of the line is a prison inmate.
The federal government calls it “the best-kept secret in outsourcing” — providing inmates to staff call centers and other services in both the private and public sectors.
The U.S. government, through a 75-year-old program called Federal Prison Industries, makes about $750 million a year providing prison labor, federal records show. The great majority of those contracts are with other federal agencies for services as diverse as laundry, construction, data conversion and manufacture of emergency equipment.

But the program also markets itself to businesses under a different name, Unicor, providing commercial market and product-related services. Unicor made about $10 million from “other agencies and customers” in the first six months of fiscal year 2011 (the most recent period for which official figures are available), according to an msnbc.com analysis of its sales records.

Justice Department and the U.S. Bureau of Prisons don’t break down which companies they do business with. But Unicor said inmates provide private call center service, including data review and sales lead generation, for “some of the top companies in America” under a federal mandate to help companies repatriate jobs they have outsourced overseas.
In a fact sheet, Unicor asserts that prisoners in the program are less likely to re-offend and are better trained for full-time work upon release. All revenue goes back into the program, which “operates at no cost to the taxpayer,” it says.
The idea has filtered down to some of the states, among them Georgia, Arizona and New York.
When New York residents call the Department of Motor Vehicles, for example, they might get an inmate at Greene Correctional Institution in Coxsackie, near Albany, or at Bedford Hills Correctional Facility for Women near White Plains, on the border with Connecticut.
“Obviously, it saves taxpayer dollars,” Brian Fischer, commissioner of the state Corrections and Community Supervision Department, told NBC station WNYT of Albany. “Number two, it provides what we call a transferable skill.”
Besides saving the state money, said Elizabeth Glazer, the state’s deputy secretary for public safety, the program is “an investment in our state’s overall safety.”

“When we help offenders build the workforce skills necessary to find viable employment after incarceration, we lessen the chances they will reoffend and end up back in the state’s prison system,” she said.
The corrections department acknowledged that callers aren’t told they’re talking to a state prisoner. But they stressed that callers are protected — no personal information is displayed to the prisoners, who don’t have access to computers, officials said.
In the private sector, states usually partner with business-to-business firms to run the services — the companies provide the equipment and facilities, and the state provides the labor. One such firm is Televerde, a Phoenix company that partners with the Arizona prison system to provide marketing services for major companies that have included Hitachi and Microsoft.
In a marketing paper, Microsoft says companies like Televerde “can reduce the burden on corporate marketing and local marketing teams can have more meaningful interactions with their customers.” (Msnbc.com is a joint venture of Microsoft and NBC News.)
For inmates, the appeal isn’t the pay, which can be as low as 50 cents an hour. It’s the training and the opportunity: “A lot of times, we need to feel like we are appreciated, and it builds self-esteem,” John Howard of Brooklyn, N.Y., an inmate at Greene, told WNYT.

“It allows me the opportunity to speak to different people of different nationalities, regardless of what ethnicity, and it makes me feel like ‘Wow, I can do better,'” he said.
Read the original story at WNYT.com
But Danny Donohue president of the New York Civil Service Employees Association, criticized the program for prioritizing marketable skills for prisoners over providing jobs to “law-abiding citizens.”
It’s “a bad idea generally and even worse considering the current economy,” Donohue said.

You can dress it up nicely to mask the true ugly face of this oppression, yet the bottom line is these are jobs that could and should be given to law abiding citizens.  This is all for profit while the majority of these companies black ball these inmates upon their release from working due to prior offenses, yet while they’re behind bars making pennies on the dollar they’re somehow eligible to to work for them.  It’s wrong. 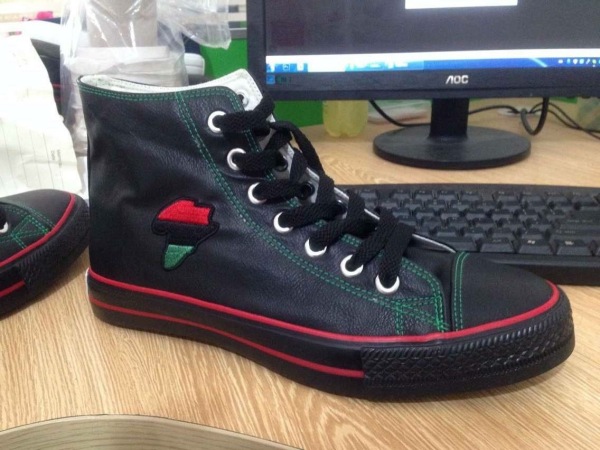 What better way to rep the RBG Flag than with the kicks on your feet.  These custom sneakers are only 40.00 bucks!  You can order them directly from their website

You can also customize them any way you like.  They’re made to order. Check them out and get yours today.

“Everyone talks about diversity, but diversity in Hollywood and the media starts with ownership,”Says Byron Allen -Entertainment Studios CEO

Byron Allen is heading back to court, this time filing a $10 billion lawsuit against the FCC and Charter Communications claiming racial discrimination against African-American-owned media.

“President Obama and the Democratic Party have completely excluded the African-American community when it comes to economic inclusion,” Allen said in a statement to TheWrap Wednesday.

“Everyone talks about diversity, but diversity in Hollywood and the media starts with ownership. African Americans don’t need handouts and donations; we can hire ourselves if white corporate America does business with us in a fair and equitable way,” he continued.

In a $10 billion lawsuit filed at the Central District Court of California Wednesday, Entertainment Studios Networks, Inc. and the National Association of African American-Owned Media (NAAAOM) claimed that Charter Communications engaged in racial discrimination in contracting against 100 percent African-American-owned media in violation of the Civil Rights Act of 1866, 42 U.S.C. section 1981.

The suit was also filed against the Federal Communications Commission “for approving mega-media mergers, such as Comcast/NBCUniversal, that discriminate against African American-owned media,” according to the documents obtained by TheWrap.

The suit further states that of the over $4 billion spent annually by Charter Communications on cable channel carriage fees and advertising, zero dollars are spent with 100 percent African American-owned media companies. “Because of this racial discrimination, President Obama’s FCC should never approve Charter Communications’ acquisition of Time Warner Cable and Bright House Networks,” it claimed. 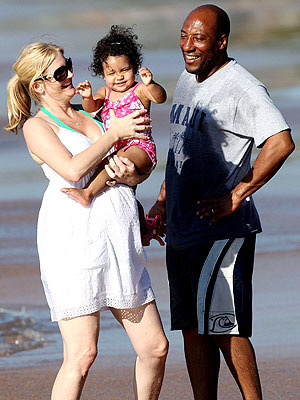 this suit, as well as others to follow, NAAAOM and I intend to stop these corporate racist atrocities and the resulting African American financial genocide that we witness every day.”

A lot of people don’t know the real meaning behind these statues, so they vandalize them, bitch about them being racist, etc. When the image of a black ‘footman’ with a lantern signified the home was a stop on the Underground Railroad. These are largely a northern thing, and weren’t commonly found in the South until after WWII when northerners moved there and brought this custom with them. The clothing of the statue was also coded. A striped jockey’s shirt meant that this was a place to swap horses, while a footman in a tailed coat meant overnight lodgings/food, and a blue sailor’s waistcoat meant the homeowner could take you to a port and get you on a ship to Canada. I always laugh when I hear black folks talk about how racist these are, because honestly, the cats who had them were likely the LEAST racist. Later, these came back into popularity after WWII, and they were again coded to show the white homeowners supported early civil rights efforts, weren’t Klan, etc.
http://www.ugrrf.org/

At first I thought this was a hoax, so I didn’t blog about it, and guess what, it is.  This story has been making the rounds on the Internet, and credible sites have been reporting it.  The Eritrean GOVERMENT has made it mandatory that the men marry at least Two women, due to a shortage of men as a result of immigration and war conflicts with Ethiopia.  As for the women, if they refuse this way of life they will face life in prison. All lies.

Well Eritreans are very beautiful people, and I’m happy to learn it’s a hoax.  It would be scary if Government could mandate who you marry and force this way of life.  Of course being American this is completely foreign to me, but they could adapt and maybe approve of this as a culture.  Sounds expensive and unreasonable to me, but the Muslim religion approves of having at least 4 wives as long as you can financially support them.  I guess that’s why I’m not religious.

Here’s more on this story via http://www.africanglobe.net/africa/eritrea-mandates-polygamy-male-population-dwindles/

If you haven’t heard by now, Kanye West will be releasing a new album next month, and has slowly been leaking anticipated album cover names and track listings.

At first he wanted to name the album “Swish”, but later decided to change it to “Waves”.  Wiz KHALIFA who is well known for smoking lots of trees (weed) sent out the following random tweet,

which Kanye decided to take personal and go off on a Twitter rant.  I’ll post the many tweets from Kanye below, but basically Kanye threw out many insults to Wiz, from his skinny jeans – to his style being a knock off of Kid Cudi – to his child being born because of him leaving Amber Rose.

Well, it didn’t take long for Amber Rose to jump on in and defend herself and Ex husband Wiz with the following Epic tweet.

So now we all know that Kim Kardashian most likely is use to “butt-er-fingers” since Kanye likes the bootyhole fondled, annnnndddd…well Kanye thinks his new album is the “LIFE” achievement record which remains to be seen.   So enjoy the shenanigans and all the memes to come from this.   I try to stay away from bullshit like this, but it’s a slow news day, and obviously y’all like the dirt.