Ammon Bundy And 7 Other Militants Arrested; 1 Killed Near Oregon Refuge

Ammon Bundy, the leader of an armed group occupying a national wildlife refuge to protest federal land policies, was among several people arrested Tuesday. Another member of the group was killed.
Ammon Bundy, leader of the group of militants that has occupied a federal wildlife refuge in Oregon for weeks, has been arrested along with seven other members of the group, including his brother, Ryan, according to federal and local law enforcement agencies.
In the wake of the arrests, police sharply boosted their presence around the Malheur National Wildlife Refuge near Burns, Ore. At least 10 people are still believed to be occupying federal property, John Sepulvado of Oregon Public Broadcasting tells NPR’s Morning Edition.
Wednesday morning, the FBI and Oregon State Police announced that they have now created a “containment” area around the refuge.
Seven of the arrests took place in Oregon; one man was arrested in Arizona.

The FBI and Oregon State Police initially arrested Bundy and four other leaders of his group in an operation that began at 4:25 p.m. local time. In that operation, a member of Bundy’s group — who has now been identified by multiple news outlets as Robert “LaVoy” Finicum — was shot and killed. Another suspect was wounded and was arrested after being taken to a hospital for treatment.
Those five arrests came as the militants were traveling to a planned meeting with community members — a drive of more than an hour and a half, Sepulvado reports. They encountered a traffic stop at which Bundy and others were taken into custody.
“His lieutenants in this were also either picked up or they fled,” Sepulvado says.
Hours later, authorities made three more arrests: two in Oregon and another in Peoria, Ariz.
Reporting early Wednesday morning from the roadside near the refuge, Sepulvado says he’s seeing “convoys of federal trucks, armored trucks, and a lot of police cars behind them, zooming to the refuge on different roads.”
That’s a change from recent weeks, he says, adding that the police vehicles were closely trailed by news vans. 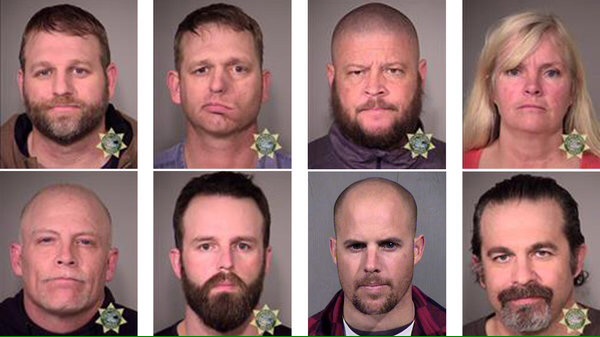 Eight people who were involved in the occupation of the headquarters of the Malheur National Wildlife Refuge in Oregon were arrested on Tuesday. (Top, from left) Ammon Bundy, Ryan Bundy, Brian Cavalier and Shawna Cox. (Bottom, from left) Joseph Donald O’Shaughnessy, Ryan Payne, Jon Eric Ritzheimer and Peter.