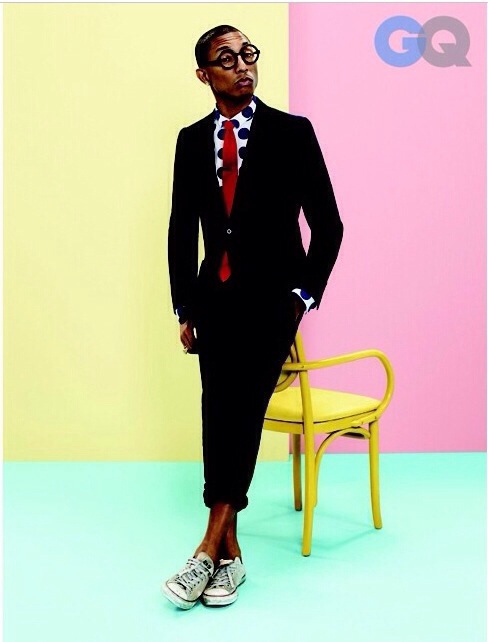 For GQ’s April cover, Pharrell sits down with writer Zach Baron about politics (he’s says Hillary will take it all!), the Tea Party, twerking, race, that much-discussed hat-collection, and losing the Best Song Oscar.

Here are the highlights from the interview:

On the Oscar snub:

“Well, trust me: when they read the results, my face was…frozen. But then I thought about it, and I just decided just to…let it go.”

On the criticism his album cover for G I R L received :

“It’s insecurity. You can be anything that you want to be, and what I chose to do is put my friends on the cover. The girl that was closest next to me is black, but they didn’t know that, so they jumped the gun. And it’s like: ‘Yo, you don’t need nobody to represent you. You represent you. You represent the best version of who you could be. You go out there and change the world.’ Because I’m black, and I wouldn’t trade my skin color for nothing. But I don’t need to keep wearing a badge that tells you that I’m black every time I do something! I’m black! My mother’s black, who’s a big part of my business; a black woman runs my business; and I’m married to a black woman. What more do you want?”

“It doesn’t make sense to me. That kind of divisiveness is not necessary at a time when we’re supposed to be unifying. That’s what happiness is all about, and if you look at my ‘Happy’ video, I had everybody in there: fat, skinny, gay, straight, purple, polka-dot, plaid, gingham print, houndstooth, alien. I fuckin’ had dogs in there! I had children in there! I had kids in there! I’m the most indiscriminate person that there is! I believe in equality.”

“Black ain’t a color: black is a spirit, and it is ubiquitous. In fact, there’s more black out in space than there is stars. We have nothing to be insecure about.”

On Hilary Clinton being the next president:

“Let me tell you why Hillary’s going to win. Everywhere you go in this country, you have red and blue. You got the Democrats; you got the Republicans. You got the Bloods; you got the Crips. You know what else is red and blue? Blood. Blood is blue in your body until air hits it, and then it turns red. That means there’s unity. There’s gonna be unity. So when you think about a night where there’s late-night talk-show hosts and it’s mostly women, that’s a different world. Right? A world where 75 percent of the prime ministers and the presidents were women: that’s a different world. That’s gonna happen, and it’s gonna happen when Hillary wins. Because you know what? No matter how staunch of a supporter you are of no-abortion, whatever you are: you’re a woman, and there’s no way in the world you’re going to vote for somebody that’s going to try to tell you what to do with your body. Hillary’s gonna win. Listen, I’m reaching out to her right now. She’s gonna win.”

On the Tea Party:

“The Tea Party guys? The guys with the n***er jokes in 2014? They’re all trying to learn how to do the Dougie. Please. While their daughters are all twerking. Trust me: Miley tells me all the time. Not saying that about Billy Ray, but I’m saying Miley tells me all the time: all those little girls, all those girls with their Republican daddies, they’re twerkin’ somewhere listening to Jay Z and Beyoncé and doin’ the ‘Happy’ dance. And that’s black.”

“I’m not a renaissance man. What I am is a maverick, and I don’t want to be put in a box at all.”

On when he moved out of his parents house:

“Uh, when I finally got tired of sneaking girls in. And it was more than one girl, you know, coming to hang out with me. So it was kind of like—you know, I didn’t want to do that to my mom.”

On his infamous buffalo hat (which he previously explained was a salute to the Buffalo Soldiers):

“Anything different, people are going to look at and go, ‘Ha ha ha ha, what is that??’ Then, after a while, they do a little bit of research; they realize it’s Vivienne Westwood, an ode to her boyfriend at the time; they had a store together called World’s End. The guy who went on to sign the Sex Pistols, Malcolm McLaren.”

Check out the full interview in the April issue of GQ.