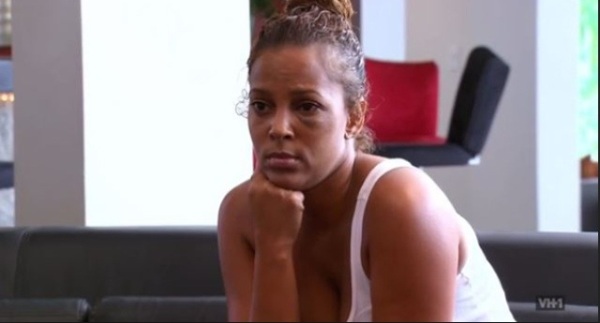 Memorial Day Weekend is definitely a time to drink and party – unless you’re the designated driver for the night.
Unfortunately, Sundy Carter learned this the hard way. The Basketball Wives star was arrested for driving under the influence on Tuesday.
According to E!, Carter was asked to give a blood or a breath sample after allegedly crossing over a double yellow line and traveling westbound in the eastbound traffic lane near Kenneth Road and Hillcrest Avenue in Los Angeles.
She provided a breath sample and blew a .18, which is almost double the legal .08 limit. Carter posted a $10,000 bail that night and is scheduled to appear in court this Thursday.

Got caught slipping Miss Pugh oops I mean Carter. They said you were a drunk and you proved them right. Oh well, just gotta take it like you did that black eye lol. #GirlBye

Rollie pollie neck aka Sundy Carter is not only a homewrecker but a cougar too. In the pic above (if you get passed the creases in her neck from the rolls) she’s rocking a engagement ring from her young man, a USC student athlete Gerald Bowman.

Gerald Bowman, a former safety for USC was born in October of 1989, making him 25, and Sundy is at least 45, so she’s reeeeally super cougaring this situation. His mother even looks younger than her…

Yep, that’s his mother. This cat has no idea about this evil demon he’s about to wife. He better be ready for the Hell this old lady is about bring his way. Smh, but hey bruh, good luck with this evil witch lol.

Anyway, Sundy was recently stood up by her married daughter’s father NBA player Larry Hughes, seen below with his wife.

Not sure why he would stand up his daughter, could have something to do with all the bad press her witch of a mother is receiving since talking recklessly about a cancer patient being infertile *shrugs* Either way Sundy and her baby girl seemed unfazed as they made the most of a bad situation. Her baby looks just like her father

She’s cute. See her interview below speaking on her possible engagement.

Shaunie O’neal the Executive Producer of the Show “Basketball Wives” took to social networks to do some major damage control about the comments made by Sundy Carter on the show’s finale. Check out her statement below.

Now Sundy Carter really serves no purpose on this show as is. She’s not a wife, she’s has no career, and she’s basically a washed up groupie whore from the late 90’s. How she got on this show is a mystery. Oh, well maybe because she had a child by a married Basketball player back in her hey hoe days, someone thought she would be a good fit, yet it really just turned out to be a major FAIL. This woman clearly lacks tact and class on every level, and will stoop to the depths of hell with ignorant mindless comments when she’s angry. So horrible to insult a ovarian cancer survivor Brandi Maxiel (cast mate & actual Basketball wife) by mocking the fact she needs invitro treatments to have a child. She’s a disgusting vile piece of trash that requires immediate disposal off of any network and the planet if you ask me. So if Shaunie truly wants to save viewers, she should replace this waste with a worthy true Basketball wife. Here are a few tweets on Shaunie’s page regarding the incident. 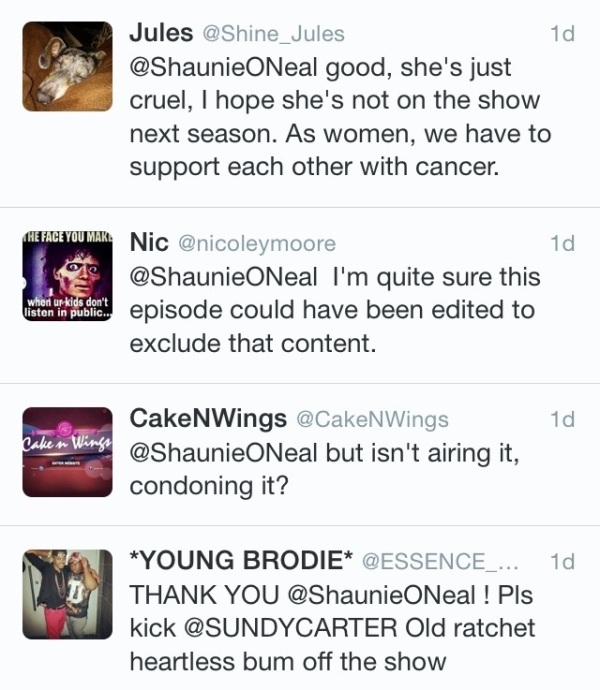 Give her the deuces Shaunie. This washed up ignorant slore should not be on television representing your brand. #ByeBitch

Okay, so I’ll just jump right in on the first thing I want to address which is Jackie Christie, her daughter Chantel and Draya.  Jackie is a old messy ass miserable bored crow, and despicable for bringing her immature ass daughter on this show to be humiliated.  Jackie is obsessed with Draya, and just won’t leave the girl alone.  She clearly tried to cause strife within Draya’s relationship with Orlando Scandolous by showing Draya the text messages (which were harmless) he sent to her daughter. Jackie then goes the extra mile to her daughter confront Draya, after Draya told her messy ass there was no need to sit down and talk to her hater daughter.

Well Draya and her man Orlando Scandolous did a pop up/in on Jackie and her daughter and that’s when the ish hit the fan.  Jackie’s daughter Chantel was pissed about it, wanted to fight, and never admitted to smashing the homie like Orlando said she did.  Jackie’s crow ass got loud and belligerent yelling at Orlando, calling him MF’as and ugly, basically making a fool of herself.  Finally Draya and her man decided to leave since they didn’t get the confession they were looking for from Chantel about sexin Orlando’s friend, and Draya called them some lying ass bitches.

To make matters worse, Jackie call’s Sundy’s irrelevant non factor ass after the fiasco, and of course SUPER HATER  ass Sundy comes thru saying Doug should beat Orlando’s ass. This broad Sundy even has the nerve to say Draya & Orlando should’ve left on a gurney.  I swear this SUPER SLORE is a miserable soul.  We all know Doug might wanna beat Orlando’s ass with his penis, and that’s about all the beating he will ever do with that flaming ass blue pearl necklace he wears looking like it’s two beads away from choking his neck *rolls eyes*

The rest of the episode was not as eventful. Jackie is still working on her Cognac, and got invited to France to work on her product.  Sundy’s ole ratchet never been anywhere ass, screamed for joy, since she has no story line or life outside of being Jackie’s evil side kick on the show.  Why is she there, maybe she blew both Jackie and Doug for a spot on the show, I wouldn’t be surprised.  Anyway, she invited the other girls to attend to trip, not sure if she should invite Draya.  Brittrash is insecure about leaving her man, for obvious reason’s.  She’s knows he’s a hoe and probably can’t wait for her to leave.  Anyway, that’s pretty much it for the foolery until next week.  I’m done!