Well Chris Brown is a free man. He was released from jail today after serving 59 days in jail on a 131 day sentence. Let’s just hope Breezy learned his lesson and doesn’t do anything to jeopardize his freedom this time around. Good luck Chris and happy freedom to you!!! 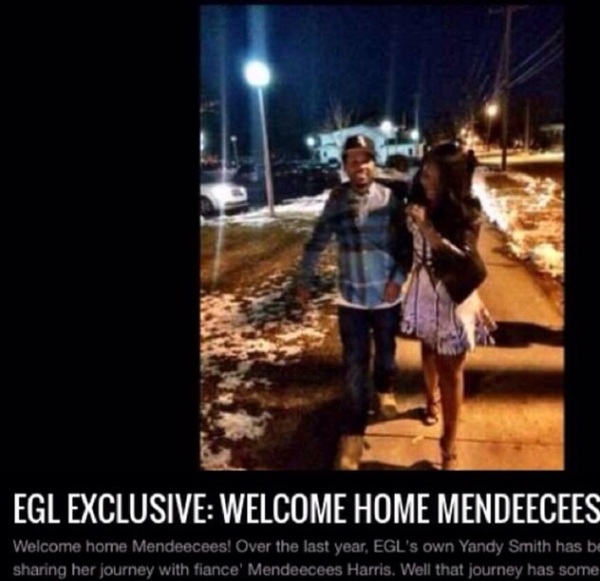 Yandy is getting that fresh out the clink vitamin “D” right now, and I’m happy for her. Her man has been released on 600k bail, and gets to go home to his family while he fights his case. Peep the details on the situation below…

Mendeecees Harris, one of the stars of the popular VH1 Love & Hip Hop reality show, has $600,000 in reasons not to run away while on bail.

And his girlfriend, hip hop talent manager Yandy Smith, agreed in federal court in Rochester Monday to be responsible for $200,000 of her boyfriend’s bond package.

With VH1 cameras waiting outside of federal court Monday, as Love & Hip Hop NY films for its next season, U.S. District Judge Frank Geraci Jr. agreed to release Harris on a $600,000 bond package — half of which was provided in court. He was released later from the Yates County Jail, where he has been held.

Assistant U.S. Attorney Frank Sherman and Mendeecees Harris’ lawyer, Donald Thompson, said in court Monday that they’ve been working toward a resolution with the case. The bail agreement, Sherman said, is expected to be substantial enough to ensure Harris returns for future court dates.

Smith, who is engaged to Harris and who is one of the bigger stars of the show, said after court that she has no worries about the $200,000 pledge.

“Mendeecees is a very good guy,” said Smith, who was once on the list of Billboard Magazine’s “Top 30 Executives under 30.”