🙊🙀😳😂 That’s what Kenya’s bullhorn carrying ass gets’ you know she was doing the mostess with a bullhorn?!? Like really!!??!! C’mon now 😩 I will be tuned in for the Reunion. Developing…… 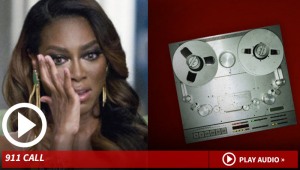 TMZ has the audio of the 911 call Kenya made after her fight with cast mate Porsha Williams. Kenya sounds irritated on the call, and says she was assaulted and hit in the head by Porsha. She didn’t need medical attention, and seems her ego was bruised more than anything, and she’s out for vengeance calling the law. Kenya should’ve just took that oops upside the head Porsha gave her in stride, since she knows she asked for it. Either way, I’m looking forward to seeing this whole fiasco go down once the reunion show airs. SMH at Miss Kenya.

It must be something in the air because bitches are getting chin checked left and right these days. If you’ve been watching The Real Housewives of Atlanta, you know Kenya has been doing the most. What I mean by the most is being inappropriate with Phaedra’s husband Apollo, and calling Porsha “dumb” and “stupid” every chance she gets. Now I would’ve bet money Phaedra Parks would be the first to put hands on Miss Kenya, but Porsha obviously had enough of Kenya’s insults and low blows that she decided to drag the hoe like Kandi was about to do Cynthia. Chile I can’t wait to witness this with my own eyes, but word on the street is this is how it went down…

Here’s what allegedly happened according to Radar online:

“Kenya brought sex toys to the reunion taping to taunt Porsha about Kordell’s sexuality and she couldn’t take it anymore,” an eyewitness told Radar about the Real Housewives of Atlanta drama.

“Porsha beat the sh*t out of her! She is a little thing and she jumped on her and pulled her down to the ground by her hair, and Kenya doesn’t have a weave, it is all her own hair.”

The physical fight came as no surprise to those on the RHOA reunion set, with the source telling Radar that Kenya completely crossed a line by mocking Kordell’s sex life.

“Porsha was sick of her saying that she was Kordell’s beard and those toys were the last straw. Porsha is a skinny thing but she was whopping her butt!”

“They couldn’t get Porsha off Kenya!” the source told Radar.

See Kenya needed that ass beat for bringing toys and what not on the show to mock that woman. She is another one who had it coming, and it was only a matter of time before one of those chicks snapped and punched that broad. Stay tuned for the reunion which is set to air in a few weeks.