History is big business worldwide. Stolen antiquities and art trade annually to the tune of 3 billion dollars a year or more.  Many countries are fustrated by this and struggle to reclaim their lost (stolen) artifacts.  In light of a recent fued between the Egyptian government and the Louvre museum in Paris over the fate of Fresco fragments, TIME Magazine examined 10 stolen antiquities and the conflicts they’ve created.

During a 1912 Egyptian excavation, German archaeologist Ludwig Borchardt discovered the bust of Nefertiti, a 14th Century BC Egyptian queen. He claimed to have an agreement with the Egyptian government that included rights to half his finds and — using this as justification — Berlin has proudly displayed the item since 1923. But a new document suggests Borchardt intentionally misled Egyptian authorities about Nefertiti, showing the bust in a poor light and lying about its composition in order to keep his most-prized find. The Egyptian Supreme Council of Antiquities has repeatedly asked Germany to give the bust back — or at the very least let it return home on a temporary basis.
Current Status: Germany insists their ownership of Nefertiti is without doubt, and Berlin’s Egyptian Museum curators maintain that even a brief loan may damage the bust.

A set of ancient fresco fragments is at the center of a nasty feud between Paris’s Louvre Museum and the Egyptian government. Zahi Hawass, head of Egypt’s antiquities department, claims the Louvre bought the fragments last year despite knowing they were taken from a tomb in Egypt’s storied Valley of the Kings in the 1980s, a prime spot for grave-robbers. Egypt, which has made reclaiming ancient art taken from its country a top priority, said they would sever cooperation with the Louvre unless the fragments were returned. A museum representative claimed on Oct. 7 that the Louvre was unaware the fragments were stolen, and said the museum would consider sending the fresco pieces back to Egypt.
Current status: For now, the pieces remain in the Louvre’s collection.

The Hottentot Venus was not a piece of art at all. Instead, it — rather, she — was a person named Sarah Baartman. An indigenous woman from an area now located in South Africa, Baartman was taken to London in 1810 and paraded through Europe, on display for the public to gawk at her full figure and for scientists to explore the reasons for her voluptuous appearance. The indignities continued past her death at the age of 26 — until 1985, Baartman’s sex organs and brain were housed in Paris’ Musee de l’Homme, ostensibly for scientific study.

Current Status: Calls by South Africans for the return of Baartman’s remains began in the early 1980s; bowing to pressure, the Musee de l’Homme took the body off display. In 1992, Nelson Mandela, then the president of South Africa, issued a formal request for the Baartman’s return, but it took a decade more of hand wringing for the French to repatriate her remains. She was buried in South Africa on August 9, 2002.
4. Ramses Mummy

With a history equally rich in antiquities and the looting of said antiquities, Egypt is exhaustive in its attempts to recover stolen artifacts. Few items are more prized than the mummified remains of its ancient pharaohs, and Egypt has tried for years to recoup what is likely the 3000-year-old body of Pharaoh Ramses I from North American museums. It is suspected that grave robbers sold the body to a Canadian museum sometime in the 1860s.

Current Status: In 1999, Atlanta’s Michael Carlos Museum received the mummy and used carbon dating and CT scans to place the mummy to the era of Ramses I. Upon confirmation, they offered to return the body to Egypt, where it is now housed at the Luxor Museum.
5. Koh-i-Noor

There are many claims to the Koh-i-Noor diamond.
The jewel may have passed through hands and nations for as many as 5000 years — some think ancient Mesopotamian texts make reference to the Koh-i-Noor as early as 3200 B.C. It may have once been a monstrous 793 carets, before a jeweler’s maladroitness and a few subsequent refinements chopped it to the mere 109-caret chunk it is today. The Moguls possessed it in the 16th Century, only to lose it to the Iranians, who then lost it to the Afghans. It later went to the Sikhs and ended up with the British. And while the stone carried with it a warning that it would bring harm to its owner, Queen Victoria paid it no heed. It circulated through the British crown jewels until finding a home in the coronation crown of Elizabeth, Britain’s most recent Queen Mother.
Current Status: Many lay claim to the Koh-i-Noor, including the Taliban, who trace its origin in India through Afghanistan in ancient days. Indian Sikhs have asked for the diamond back too, as they were the most recent holders before the British. For their part, the British are deaf to these claims, arguing since the diamond has passed through so many hands for so long, they have just as much right to the stone as anyone.

Are the members of one of the world’s most prestigious and legendary secret societies grave robbers? Descendants of Geronimo want answers to the persistent rumors that members of Yale’s Skull and Bones Society unearthed the remains of the Apache warrior to bring back to their New Haven campus.
Current Status: Descendant Harlyn Geronimo filed a lawsuit in February against Yale, the Order of Skull and Bones and members of the U.S. government, calling for the return of any of Geronimo’s remains. A Yale spokesman had no comment, but some experts believe Bonesman raided the wrong grave anyway. No matter — the Bonesmen are also rumored to possess two more famed skulls, those of Pancho Villa and President Martin Van Buren. 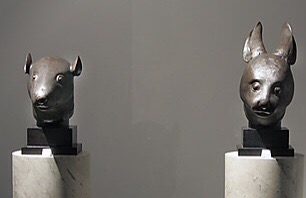 recent attempt to sell a pair of brass Chinese animal heads took an inventive turn after they were put up for auction as part of the sale of French designer Yves Saint Laurent’s art collection. A $40 million bid was received for the two heads (a rabbit and a rat), which French and British troops removed from a clock at China’s Old Summer Palace during the second Opium War in 1860. One hitch — the buyer had no intention of paying. Chinese art dealer Cai Mingchao submitted the massive bid to protest the sale of the heads, which many Chinese see as unfairly torn from their cultural patrimony.
Current Status: Saint Laurent’s partner said he plans to keep the heads and is “thrilled” the sale failed. And while Christie’s may consider charges against Cai, they will likely relent after an outpouring of support from the Chinese public for his actions

–If course the list of stolen goods go on til infinity unfortunately.  It makes one think that people desperate of culture would resort to stealing items from others. Either that or pure greed and envy.  Regardless there’s nothing honorable about proudly displaying stolen items in museums.  It’s actually rather repulsive, disgusting and disrespectful.