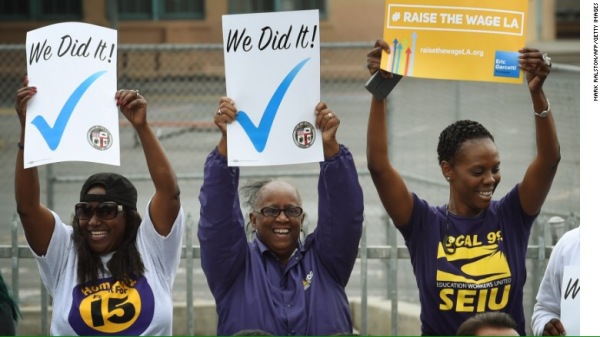 SACRAMENTO, Calif. (AP) — California legislators and labor unions on Saturday reached an agreement that will take the state’s minimum wage from $10 to $15 an hour, a state senator said, a move that would make for the largest statewide minimum in the nation by far.
Sen. Mark Leno, D-San Francisco, told The Associated Press the proposal would go before the Legislature as part of his minimum-wage bill that stalled last year.
Leno said the deal would avoid taking the issue to the ballot. One union-backed initiative has already qualified for the ballot, and a second, competing measure is also trying to qualify.
“This is an issue I’ve been working on for many years,” Leno said. “The governor and stakeholders have all been negotiating earnestly and in good faith for some time.”
Leno did not confirm specifics of the agreement, but most proposals have the wage increasing about a dollar per year until it reaches $15 per hour.

The Los Angeles Times, which first reported the deal, said the wage would rise to $10.50 in 2017, with subsequent increases to take it to $15 by 2022. Businesses with fewer than 25 employees would have an extra year to comply.
At $10 an hour, California already has one of the highest minimum wages in the nation along with Massachusetts. Only Washington, D.C., at $10.50 per hour is higher. The hike to $15 would make it the highest statewide wage in the nation by far, though raises are in the works in other states that might change that by the time the plateau is reached.

Union leaders, however, said they would not immediately dispense with planned ballot measures.
Sean Wherley, a spokesman for SEIU-United Healthcare Workers West, confirmed that his group was involved in the negotiations. But he said the group will continue pushing ahead with its initiative that has already qualified for the ballot.
“Ours is on the ballot. We want to be certain of what all this is,” Wherley said. “We are going ahead with it. If some agreement is signed into law, then our executive board would decide what to do. They would only make that decision after any agreement is signed into law.”
Kevin Liao, a spokesman for Assembly Speaker Anthony Rendon, D-Paramount, declined to comment.
A spokesman for Gov. Jerry Brown, Evan Westrup, did not immediately respond to a request for comment.
This wage increase is long overdue, since prices for rent, food, and utilities continue to rise. The overall cost of living here in California does not match the incomes being paid in many cases.  It will take some time, but this is a victory for many I’m sure.