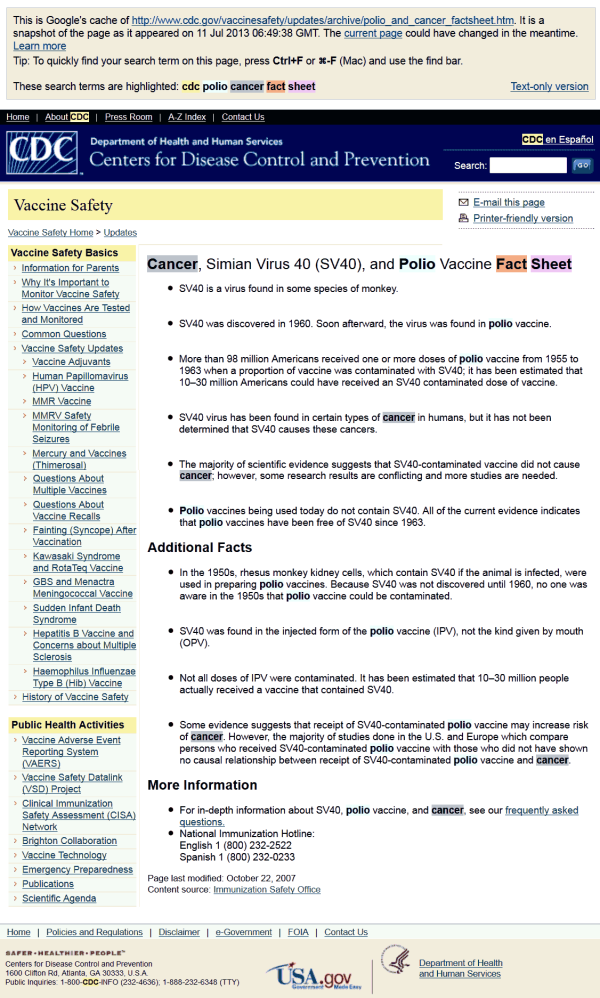 The CDC has admitted that between 1955–1963 over 98 million Americans received one or more doses of a polio shot which was contaminated with a cancer-causing virus called Simian vacuolating virus 40 (SV40). The CDC quickly took down the page, along with Google, but the site was luckily cached and saved to symbolize this grand admission.

To further confirm this unbelievable admission, Assistant Professor of Pathology at Loyola University in Chicago Dr. Michele Carbone has been able to independently verify the presence of the SV40 virus in tissue and bone samples from patients who died during that era. He found that 33% of the samples with osteosarcoma bone cancers, 40% of other bone cancers, and 60% of the mesothelioma’s lung cancers all contained this obscure virus. This leaves the postulation that upwards of 10–30 million actually contracted and were adversely affected by this virus, to be deadly accurate.

This is very disturbing to me as it should be to everyone.  Too many vaccines have been proven to be linked to diseases and experimental it’s extremely negligent and intentional.

Now, certain states have put policies in place making vaccines mandatory – forcing them on people.  We should have a choice about what we allow in our bodies. I’m not comfortable being left to trust what’s in a syringe I have no way of verifying what it is or if it’s safe.  We are being poisoned daily as a method of population control. Be mindful and ask questions before being injected with any substance.