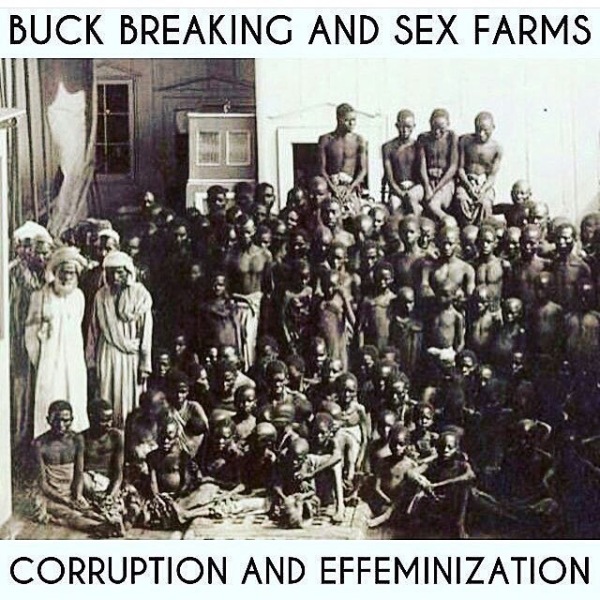 Did you know that during slavery in the U.S. gay white slaveholders would buy male slaves to engage in forced homosexual sex acts?

These male slaves were purchase based entirely on the prerequisite of them possessing a large penis.

Black men were routinely raped by their gay slave owners. The process was known as “breaking the buck”. It involves perhaps the most heinous and atrocious acts known to man.

A strapping Negro slave, who was defiant, surly and may stir up trouble, was beaten with a whip till bloody in front of his entire slave congregation. The slave owner, deathly afraid of an uprising, would cut down a tree and, with the help of the overseer, would then pummel the deviant “buck” into submission. Once the slave was worn down, the white master had the other Negro slaves force him over the tree stump where his britches would be removed and he laid fully exposed and ripe for the taking.

What came next caused fear and terror to ripple through every slave plantation across the South.

The master, drunk on blood lust, would explain to all strong, young black men that if they do not follow strict orders and comply with the whims of the Overseer and the Master, this too would be their fate. He removed his own clothing and proceeded to savagely sodomize the buck in front his wife, family, friends and children. He then invited his associates from other plantations to join in the ****** Festivities.

In order for his plan to take effect, he would require the buck’s male child to watch, front row center, so he too can witness his father’s sexual demise and humiliation. Buck Breaking was the slave master’s very effective tool to keep all young black slaves from ever being defiant and taking revenge. It also frightened the mother’s and wives from ever giving consent to an uprising.

Buck Breaking was so successful that it was made into a “Sex Farm” where white men could travel from plantation to plantation feeding their sadistic, homosexual needs. If there was ever any doubt that the white race is our mortal enemy, please remove all doubt and see the truth for what it is.